What is advocacy?
Advocacy is the act of showing public support for a particular cause or policy.

What is an advocate?
An advocate is someone who actively supports a cause or policy by building relationships with those who exert influence. Anyone can and should be an advocate, regardless of experience.

Agricultural education has changed a lot in the past few decades. It is very important to understand that shift and what has led to it. It is important to know your history before you begin to develop your own story. This is also a time for you to examine your local agricultural education program by gathering test scores, student success stories and anecdotes to help enrich the story you will tell!

There are many factors that have influenced agricultural education. It helps to understand each one and the role they play in the profession.

What is agricultural education?

Other Influencers of Agricultural Education
There are many other factors that play a role in the direction of agricultural education. As you can see from the graphic below, some of these influences are constantly shifting and evolving, so it’s important to be familiar with why your program is the way it is. 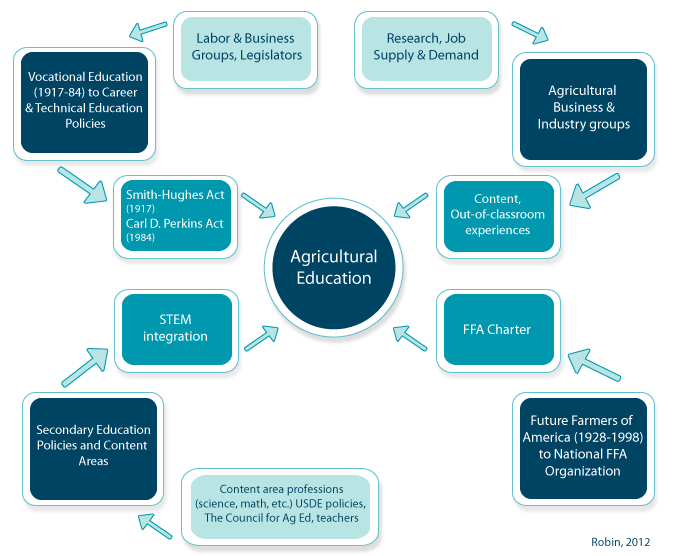 National and State Ag Ed Profiles
See what agricultural education programs are like in each state and from the national perspective.

Remember that even before the legislative process begins you have an opportunity to influence it. The first way is by becoming an educated voter and ensuring that the candidate you select supports your program and shares your side of priority issues. But be sure to truly investigate these individuals to determine what side of issues they stand on, don’t just take a television commercial’s word for it!

The chart below gives a basic overview of the steps of the legislative process. For a more detailed description of each step, download this document. 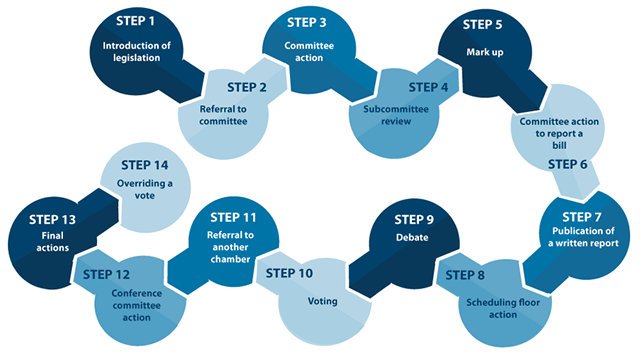 Hover over image for more description

Step 1: Introduction of Legislation
Anyone may draft a bill; however, only members of Congress can introduce legislation, and by doing so become the sponsor(s).

There are four basic types of legislation: The official legislative process begins when a bill or resolution is numbered — H.R. signifies a House bill and S. a Senate bill — referred to a committee and printed by the Government Printing Office.

Be involved in presenting your ideas for a change or addition to legislation to your legislator.
Step 2: Referral to Committee
With few exceptions, bills are referred to standing committees in the House or Senate according to carefully delineated rules of procedure.

Know what committees your legislators serve on! This way you know if you should be in contact with your legislator to express support or concern during this stage regarding upcoming legislation.
Step 3: Committee Action
When a bill reaches a committee it is placed on the committee's calendar. A bill can be referred to a subcommittee or considered by the committee as a whole. It is at this point that a bill is examined carefully and its chances for passage are determined. If the committee does not act on a bill, it is the equivalent of killing it.

Determine important people to testify for pending legislation that may enhance your case for this type of legislation. Be sure to identify people that truly have expertise and support in this area, you may even be that person!
Step 4: Subcommittee Review
Often, bills are referred to a subcommittee for study and hearings. Hearings provide the opportunity to put on the record the views of the executive branch, experts, other public officials, supporters and opponents of the legislation. Testimony can be given in person or submitted as a written statement.

Continue to communicate with your legislators that may be on the committee reviewing this bill. If your district is not represented, advocates from districts that are and ensure they contact their representatives to share their stories as well.
Step 5: Mark Up
When the hearings are completed, the subcommittee may meet to "mark up" the bill, that is, make changes and amendments prior to recommending the bill to the full committee. If a subcommittee votes not to report legislation to the full committee, the bill dies.
Step 6: Committee Action to Report a Bill
After receiving a subcommittee's report on a bill, the full committee can conduct further study and hearings, or it can vote on the subcommittee's recommendations and any proposed amendments. The full committee then votes on its recommendation to the House or Senate. This procedure is called "ordering a bill reported."
Step 7: Publication of a Written Report
After a committee votes to have a bill reported, the committee chairman instructs staff to prepare a written report on the bill. This report describes the intent and scope of the legislation, impact on existing laws and programs, position of the executive branch, and views of dissenting members of the committee.

Be sure to take a look at the published report and determine if any amendments and/or modifications made in committees affect the pending legislation in any way.
Step 8: Scheduling Floor Action
After a bill is reported back to the chamber where it originated, it is placed in chronological order on the calendar. In the House there are several different legislative calendars, and the Speaker and majority leader largely determine if, when, and in what order bills come up. In the Senate there is only one legislative calendar.
Step 9: Debate
When a bill reaches the floor of the House or Senate, there are rules or procedures governing the debate on legislation. These rules determine the conditions and amount of time allocated for general debate.

Be sure to get your advocates to communicate what they believe very clearly so that they can ensure that the legislators are educated on your issue during the debate process.
Step 10: Voting
After the debate and the approval of any amendments, the bill is passed or defeated by the members voting.
Step 11: Referral to Other Chamber
When a bill is passed by the House or the Senate it is referred to the other chamber where it usually follows the same route through committee and floor action. This chamber may approve the bill as received, reject it, ignore it, or change it. Know what committees your legislators serve on! This way you know if you should be in contact with your legislator to express support or concern during this stage regarding upcoming legislation.
Step 12: Conference Committee Action
If only minor changes are made to a bill by the other chamber, it is common for the legislation to go back to the first chamber for concurrence. However, when the actions of the other chamber significantly alter the bill, a conference committee is formed to reconcile the differences between the House and Senate versions. If the conferees are unable to reach agreement, the legislation dies. If agreement is reached, a conference report is prepared describing the committee members recommendations for changes. Both the House and the Senate must approve of the conference report.
Step 13: Final Actions
After a bill has been approved by both the House and Senate in identical form, it is sent to the President. If the President approves of the legislation he signs it and it becomes law. Or, the President can take no action for ten days, while Congress is in session, and it automatically becomes law. If the President opposes the bill he can veto it; or, if he takes no action after the Congress has adjourned its second session, it is a "pocket veto" and the legislation dies.
Step 14: Overriding a Veto
If the President vetoes a bill, Congress may attempt to "override the veto." This requires a two thirds roll call vote of the members who are present in sufficient numbers for a quorum.

The ACTE National Policy Seminar is held annually in Washington, D.C. and is a great opportunity for agriculture teachers to develop their skills as advocates for career and technical education and agricultural education. NAAE hosts special programming during the policy seminar focused on helping agricultural educators tell their story. Attendees will also have opportunity to visit with their national legislators and their staffers. These are skills they can take back to increase their effectiveness as an advocate at the local and state levels as well.

(After I attended NPS) “I was able to tell my students from first-hand experience how the legislative process works, the number of legislative assistants, and specialists in DC, and how I was able to advocate for a subject they know I am passionate about — agricultural education. After all, we all know the best way to teach is to lead by example.”
— Toni Sasso, Illinois Agriculture Teacher and 2013 NPS attendee

NAAE has lots of resources on advocacy, so take advantage of them. But don’t stop here — if you find other resources, we encourage you to share them with us in the Advocacy community on Communities of Practice so we can help other educators find the best tools available.

How have you educated yourself to become a stronger advocate for agricultural education? Share your story!